I Learned to Coordinate With Others

In a recent vote, I was elected to be a church leader. In order to repay God’s love, I made a resolution before God: No matter what I encounter, I will not abandon my responsibilities and betray God. I will coordinate with my brothers and sisters to perform my duty well and will be someone who pursues the truth.

Sister Wang and I were responsible for the church work, and when at first we had differing opinions about how to organize some church matters, I would consciously pray to God asking Him to protect my heart, and to make me able to relinquish myself and not to argue with my sister. I would also often remind myself that I must work harmoniously with this sister. However, because I only paid attention to controlling my actions in order that I wouldn’t have conflicts with her, and because I had not entered into truth, over time, I had more and more disagreements with her. One time I wanted to promote a sister to the duty of watering new believers, Sister Wang said the sister I’d chosen was no good. After I switched my candidate, she still said it was unsuitable. I immediately became upset. Later I never brought up the matter again. When she asked about it, I said in a rage: “Select whoever you want!” After this, in order to avoid conflict, regardless of what she said, if there was any dissent, I wouldn’t say anything. Sometimes holding it in became unbearable, so I would hide somewhere and cry. Therefore, I always felt that I had been wronged. Another time, the upper-level leader handed a task over to me to deal with, and when it was all done, I felt quite pleased. I thought Sister Wang would praise me. Unexpectedly, she rained on my parade, saying: “This really is not the right way to do this.” This really irritated me. I thought: “You didn’t even have a look and you flat out reject it. You’re really self-righteous!” We each held to our opinions and neither of us was willing to submit to the other. Finally, I wouldn’t even listen to the communications of the word of God. The more I thought about it, the more I felt that she intentionally made things difficult for me. I had tolerated her again and again, yet she still treated me this way. The more I thought about it the more I felt wronged. As a result, I was completely left in darkness and had lost the work of the Holy Spirit. From that time on, I wasn’t willing to work with her. I thought: “I dare not provoke this sister, but I can avoid her.” Because I was unwilling to perform my duty with this sister, I used my small stature and incompetence as an excuse to write my resignation letter. Not long after, when I met my upper-level leader, I told her about my resignation. She then communicated to me the principles of taking responsibility and resigning as well as the great care and effort God has put into saving people. My stubborn heart would not yield, however, and I was determined to resign from my post. 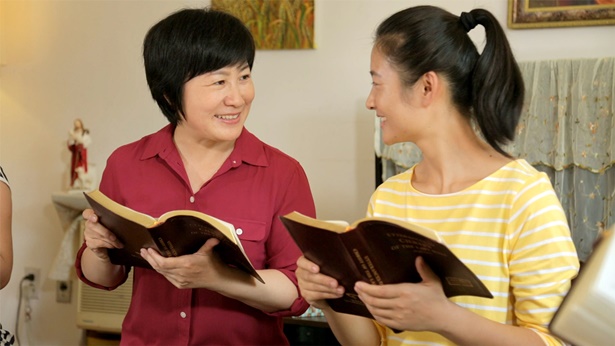 Afterward, I read God’s word saying: “If you do not learn from each other, help each other, and make up for each other’s shortcomings when doing work in the churches, then how can you learn any lessons? Whenever you encounter anything, you should fellowship with each other so that your lives can benefit. … You must achieve harmonious cooperation for the purpose of the work of God, for the benefit of the church, and so as to spur your brothers and sisters onward. You should coordinate with one another, each amending the other and arriving at a better work outcome, so as to care for God’s will. This is what true cooperation is, and only those who engage in it will gain true entry. … Each of you, as people who serve God, must be able to defend the interests of the church in everything you do, instead of simply considering your own interests. It is unacceptable to act alone, undermining each other. People who behave like that are not fit to serve God!” (The Word, Vol. 1. The Appearance and Work of God. Serve as the Israelites Did). And it was said in a sermon: “There is no main role and deputy in serving in coordination. Everyone stands on an equal footing, and the principle is to achieve a consensus through fellowshiping about the truth. This requires people to obey one another. That is, whoever speaks correctly and speaks in conformity with the truth should be obeyed. The principle is to obey the truth. The truth is authority, and whoever can fellowship about something in line with the truth and see things accurately should be obeyed. No matter what people do or what duty they fulfill, obeying the truth is always the principle” (“The Meaning and Explanation of the Ten Principles of the Church Life Established by God’s Family” in Work Arrangements). From the sermon and God’s word, I saw the way to practice and enter into serving in coordination with each other. That is, being considerate of God’s will and protecting the interests of God’s family while coordinating and performing our duties together. Regardless of what people do or what work they are doing, it should all be done by taking submission to the truth and by communicating truth to reach a common understanding as the principles. You cannot be so arrogant and conceited as to maintain your own opinions and make others listen to you, and you cannot sell out the principles of the truth to protect your interpersonal relationships. Moreover you cannot just follow your own character to create independence, you must let go of yourself and take the initiative to deny yourself, learn from others, and make up for your own weaknesses in order to obtain a harmonious partnership. Only then can you have God’s blessings and guidance in your duty, can you achieve better results in church work, and can your own life be benefited. On the contrary, if you are arrogant while working together, if you don’t seek after the principles of the truth but make a dictatorship to control others, or if you operate alone and do things by your own desire, then you will suffer God’s loathing and cause losses for the church work. Yet I was arrogant and always wanted to have the final say. How did I not know that the work in God’s family was not something that a single person could accomplish? All people have no truth and have far too many shortcomings. Acting unilaterally makes mistakes very likely to happen. Only through cooperative work can more work of the Holy Spirit be obtained to make up for our shortfalls and prevent mistakes. At the time, I couldn’t help but feel guilt and self-blame for my satanic disposition that was exposed in my arrogance and selfishness, and in not having the slightest bit of consideration for God’s will, as well as for only focusing on not losing face and acting on impulse to the point of displaying shocking and rude behavior. I believe that I was too blind and foolish, and I didn’t understand the meaning of God’s intent to arrange an environment for me to practice serving in coordination—even to the point that I didn’t try to learn from my partner’s strengths to compensate for my shortcomings while performing my duties, or to learn what I needed through working together. As a result, it caused losses for the work of the church and delayed my own growth in life. Today, were it not for God’s pity and the enlightenment of God’s word, I would have been unable to let go of myself and would still want others to listen to me. In the end, who knows what catastrophe I would cause? Coming to this realization, I made a resolution: I am willing to act according to the word of God, I am willing to work harmoniously with the sister for the work of the church and for my growth in life and I won’t think about my own interests anymore.

Afterward, I opened up to my partner sister about how I had come to know myself, and she also opened up to me about how she had come to know herself. Through having a real heart-to-heart, the prejudices I had of her and the distance between us vanished, and we both became willing to enter together into the principles of serving in coordination with each other. After that, our duty coordinating with each other was much more harmonious. When we had differing opinions, we sought the truth and grasped God’s will by praying to Him. When we saw each other’s shortcomings, we were understanding and forgiving; we treated each other with love. Unwittingly, God’s blessings fell upon us and the gospel work bore significantly more fruit than in the past. At this time I hated having lived by my corrupt disposition in the past, and that I hadn’t learned practically the lessons in the environment God had arranged for me; even more I hated that I did not pursue the truth and had owed God too much. I finally experienced the sweet taste of putting truth into practice, I had more faith to fulfill my duties and satisfy God, and my heart became full of gratitude to God. From now on I am willing to make efforts in even more aspects of the truth, to seek to enter into the reality of God’s word, to act with principle, and to perform my duties properly and repay God’s love.

Human Relationships
Previous: Judging by Appearances Is Just Absurd
Next: The Finest Gift God Has Given Me

I am grateful for this enlightenment from God, which not only helped me understand a truly harmonious partnership, but more so helped me see the hidden dangers in my own service with my partner, and showed me that when corrupt mankind takes power, the result is the same as the great red dragon.

The Importance of Coordination in Service

This made me see that harmonious coordination in our service is so critical for the work of the church and our personal life entry! But I had not sought God’s will at all in this. I had not paid attention to what practical lessons I could learn through this coordination.