Recently, a church held a vote. Sister Li, the church leader, went against the principles of the church, and carried out the vote in her own way. When some other brothers and sisters voiced their opinions, not only did she not acknowledge them, but insisted on upholding her own way. The church was subsequently thrown into confusion by the leader’s actions. When I got the news, I totally lost my temper: How could someone be so arrogant? Carrying out the duties of a church leader without God in one’s heart, looking down upon the work arrangements, refuting and rejecting brothers’ and sisters’ suggestions—who else is there to blame for the church’s confusion but you! I immediately looked up the relevant principles and God’s words in preparation to commune with her and hold her against those words, so that she would be able to obey. Later that night, I went to meet Sister Li. During communion, I spoke to her with an accusatory tone, unable to suppress my anger. To my surprise, only about ten minutes into our meeting, the sister actually got up and rushed out with tears in her eyes. I was unrelenting, thinking: “She goes against the principles of the church and doesn’t allow anyone else to criticize her. How will she work in the future? What a dangerous situation! This just won’t do, I can’t let her just walk away from this issue. I must write her a letter.” Right then and there, I sat down and wrote her a letter in which I nominally acknowledged that my attitude in communion hadn’t been ideal and asked for her forgiveness. In the letter, I also brought principles to bear on her problems and gave her some communion. I thought that I had handled things quite well. I demonstrated that I was a leader who was able to gain understanding of myself and let go of my own ego, while at the same time using truth to resolve issues. Seeing how I handled things, she would definitely be convinced and gain some new understanding, I thought. 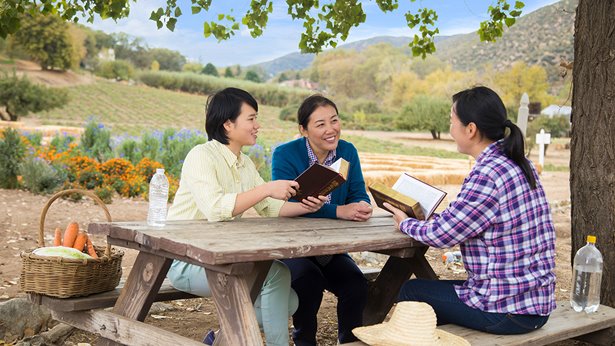 Once, when I was communing on this matter with my leader, the leader asked me how I had entered into the truth when resolving this issue. “How did I enter into the truth? Did I do a bad job? Were my actions inappropriate?” I felt slightly confused. The leader continued: “It’s not a question of how well you resolved the issue, but rather, in resolving the issue, did you use your status to convince others or did you use the truth to resolve the problem, exalt and testify to God, and let others gain an understanding of themselves and God? On the surface, it looks as though you fellowshiped about God’s word, but in actuality you were just trying to get her to succumb to you. Why did the sister end up leaving? It’s clear she left because she couldn’t accept your fellowship, she wasn’t convinced. If we’re only concerned with communicating the truth with others and neglect to pay attention to our own corruption, neglect to know ourselves, and work just for the sake of work, failing to learn our lessons and change our dispositions, are we not then like Paul? Paul gave guidance to others but, in the service of God, his old corrupt disposition became ever more set in his corrupt ways. In the end, he became a man who believed in God and yet resisted God, meeting his end in perdition.” The leader’s fellowship was like a call stirring me from a long slumber. Indeed, just as she said, when God arranged this situation for me, I didn’t seek the truth or search for God’s will, didn’t consider how to enter into the truth myself. Reflecting upon my own emotional response in the situation, all I did was think about solving other people’s problems. In this sense, was I considering God’s will to bring others before Him? Or was I rather using my status to force others to accept my point of view? I was also deeply corrupted by Satan, without truth, humanity or reason. I too was a victim. How was I any better than anyone else? However, I had no self-knowledge, I’d been hot-blooded and lectured people condescendingly, and what I’d revealed was nothing but an arrogant and conceited face of Satan! When the sister rushed off crying, I didn’t reflect on myself, instead resenting her and flying into a rage. Did my behavior not resemble the tyrannical actions of the great red dragon?

Thank God for His guidance! This experience enlightened me to the importance of entering into the reality of the truth. Only by entering into the reality of the truth can we receive God’s protection and not resist God. I read this in a sermon: “Many people become false leaders or antichrists because they do not really pursue the truth and, as a result, they don’t have slightest reality of the truth. As soon as they gain status and have some authority they begin to act wantonly, stand high above all, lord themselves over others and covet the blessing of status. In the end, such people are abhorred and rejected by God’s chosen, succumbing ultimately to utter failure. Could this possibly be a rare occurrence? Why can’t people come to their senses? What use is there in believing in God just to gain authority, wield power and covet the blessing of status? This is the behavior of selfish, lowly and evil people, it is the lowly desire of those who walk the path of the antichrist” (The Fellowship From the Above). Through this sermon, I realized that for those who do not seek to enter into the reality of the truth, once they have status, they will lord themselves over others, stand high above all and haughtily use their status to suppress, frame, and control others. They will ultimately become false leaders and antichrists. Although my behavior and expressions in this matter did not appear on the outside to be that serious, the corruption that was revealed within me and my God-defying nature and essence could not be denied—I was following the path of the antichrists. If I did not have the direction of God, I certainly would not have realized my folly and would still be living in self-righteousness. Continuing down that path, I would be exposed and phased out! When I thought how things could have panned out, it gave me the chills. What dangerous waters I was treading in, believing in God for so many years and still unable to know how to enter into the reality of the truth like Paul, who lived within his imaginings and conceptions, but continued to believe in and serve God according to his natural character and corrupted nature. If I don’t reverse my current state, I may end up being punished by God. In the future, I need to place more importance on personal entry and pursuit of the truth.

It was God’s guidance and enlightenment that enabled me, who could only preach letters and doctrines and not enter into the reality of the truth, to begin to improve, and they made me see the righteous disposition of God and gain some knowledge of God’s holy essence. Just as a passage in a sermon said, “Wherever there is corruption, there will be judgment, wherever there is evil, there will be chastisement” (The Fellowship From the Above). Now, I perceive more and more that God’s work of judgment and chastisement is just what we need, and they are also God’s greatest salvation and grace for man. Only through receiving this judgment and chastisement can we be wrested from the dark influence of Satan, cast off the darkness, seek the light and pursue the truth, enter into the truth, and practice the truth. I pray that God’s judgment and chastisement follow me wherever I go, so that I may soon attain purity and live as a true human being.

Previous: Tear Off the Mask and Start Life Afresh
Next: I Enjoyed a Rich Banquet

Finding Your Place Is Key

By Zhou Yuqi, China Once, during a chat, I heard a church leader say, “Sister Gao has good caliber, comprehends things purely, and...

By Tingting, China I was prone to headaches from the time I was little, and sometimes it hurt so much that I would just roll back and forth...

Why Is Taking Advice So Hard?

By Judy, the Philippines In June 2021, I was watering newcomers in the church. Brother Jeremy was supervising our work. He’d generally ask...