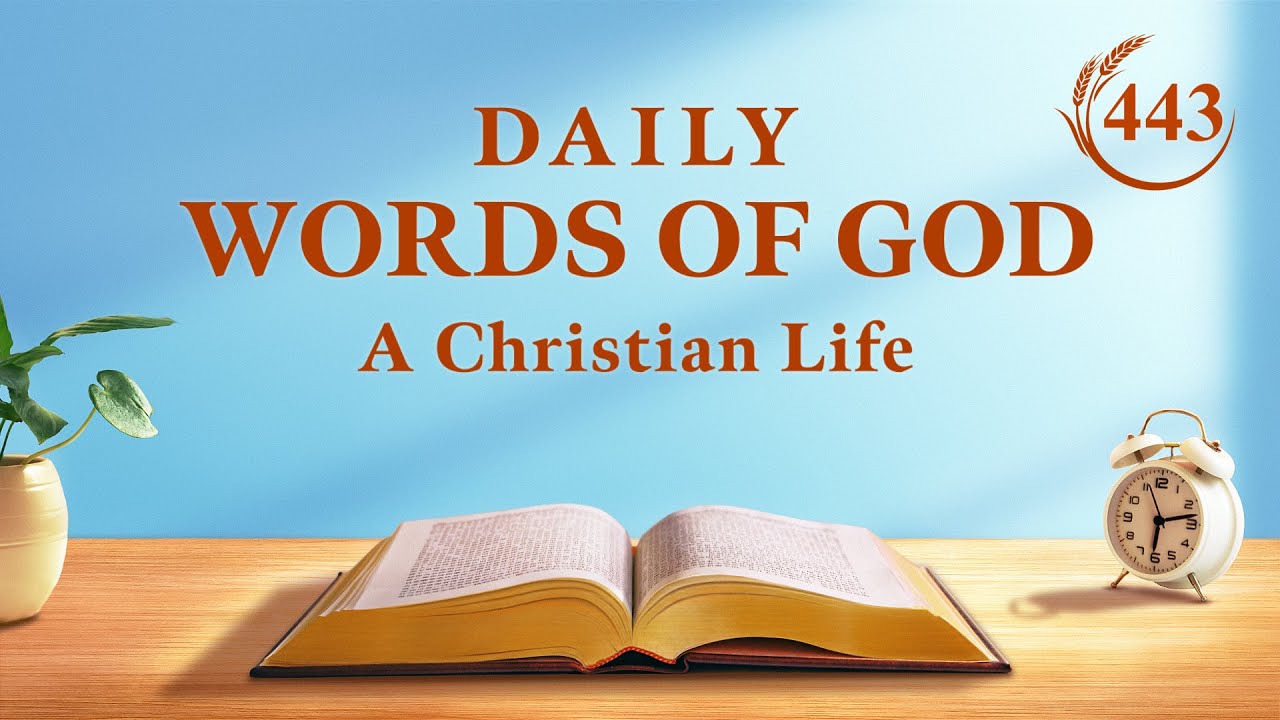 Daily Words of God | "You Must Understand the Work—Do Not Follow in Confusion!" | Excerpt 443

Do you know what you need to be equipped with right now? One aspect of it involves visions about the work, and the other aspect is your practice. You must grasp both of these aspects. If you do not have visions in your quest to make progress in life, then you will have no foundation. If you have only paths of practice, without the slightest vision, and have no understanding whatsoever of the work of the overall management plan, then you are a good-for-nothing. You must understand the truths that involve visions, and as for the truths relating to practice, you need to find appropriate paths of practice after you have understood them; you must practice in accordance with the words, and enter in according to your conditions. Visions are the foundation, and if you pay no attention to this fact, you will not be able to follow along to the very end; experiencing in such a manner will either lead you astray or cause you to fall down and fail. There will be no way for you to succeed! People who do not have great visions as their foundations can only fail; they cannot succeed. You cannot stand firm! Do you know what believing in God involves? Do you know what following God means? Without visions, what path would you walk? In the work of today, if you have no visions, you will not at all be able to be made complete. In whom do you believe? Why do you believe in Him? Why do you follow Him? Do you see your faith as a sort of a game? Are you handling your life as a kind of a plaything? The God of today is the greatest vision. How much of Him do you know? How much of Him have you seen? Having seen the God of today, is the foundation of your belief in God solid? Do you think that you will attain salvation as long as you follow along in this muddled way? Do you think you can catch fish in muddy water? Is it that simple? How many notions regarding the words God utters today have you set aside? Do you have a vision of the God of today? Wherein does your understanding of the God of today lie? You always believe that you can obtain Him just by following Him, or just by seeing Him, and that no one will be able to get rid of you. Do not assume that following God is such an easy matter. The key is that you must know Him, you must know His work, and you must have the will to endure hardship for His sake, to sacrifice your life for Him, and to be perfected by Him. This is the vision that you should have. It will not do if your thoughts are always bent on enjoying grace. Do not suppose that God is here just for people’s enjoyment, or just to bestow grace upon them. You would be wrong! If one cannot risk their life to follow Him, and if one cannot abandon every worldly possession to follow, then they will certainly not be able to keep following Him to the very end! You must have visions as your foundation. If misfortune befalls you one day, what ought you to do? Would you still be able to follow Him? Do not say lightly whether you would be able to follow to the end. You had better first open wide your eyes to see just what time it is now. Though you may currently be like pillars of the temple, a time will come when all such pillars will be gnawed by worms, causing the temple to collapse, for at present, there are so many visions that you lack. You only pay attention to your own little worlds, and you do not know what the most reliable and appropriate way of seeking is. You do not heed the vision of the work of today, nor do you hold these things in your hearts. Have you considered that one day your God will put you in a most unfamiliar place? Can you imagine what would become of you one day when I might snatch everything from you? Would your energy on that day be as it is now? Would your faith reappear? In following God, you must know this greatest vision that is “God”: This is the most important issue. Also, do not assume that in parting company with worldly men to become sanctified, you will necessarily be in God’s family. These days, it is God Himself who is at work among creation; it is He who has come among the people to do His own work—not to carry out campaigns. Among you, not even a handful are able to know that today’s work is the work of the God in heaven who has become flesh. This is not about having you made into outstanding persons of talent; this is to help you to know the significance of human life, know the destination of human beings, and know God and His entirety. You should know that you are an object of creation in the hands of the Creator. What you should understand, what you should do, and how you should follow God—are these not the truths that you must comprehend? Are they not the visions that you should see?

Once people have had visions, they possess a foundation. When you practice on the basis of this foundation, it will be much easier to enter in. As such, you will have no misgivings once you have a foundation for entering in, and it will be very easy for you to enter in. This aspect of understanding visions and of knowing the work of God is crucial; you must have it in your arsenal. If you are not equipped with this aspect of the truth, and only know how to talk about paths of practice, then you will be hugely defective. I have discovered that many of you do not emphasize this aspect of the truth, and when you listen to it, you seem to only be listening to words and doctrines. One day you will lose out. There are some utterances these days that you do not quite understand and do not accept; in such cases, you should seek patiently, and the day will come when you do understand. Gradually equip yourself with more and more visions. Even if you understand only a few spiritual doctrines, that is still better than paying no attention to the visions, and is still better than understanding none at all. This is all helpful to your entry, and will clear away those doubts of yours. It is better than your being filled with notions. You will be much better off if you have these visions as a foundation. You will have no misgivings whatsoever, and will be able to enter in boldly and confidently. Why bother always following God in such a confused, doubtful manner? Is that not the same as burying your head in the sand? How nice it would be to stride into the kingdom with a strut and a swagger! Why be so full of misgivings? Are you not just putting yourself through sheer hell? Once you have gained an understanding of the work of Jehovah, of the work of Jesus, and of this stage of work, you will have a foundation. At the moment, you might imagine that to be quite simple. Some people say, “When the time comes and the Holy Spirit begins the great work, I’ll be able to talk about all these things. The fact that I don’t really understand right now is because the Holy Spirit has not enlightened me that much.” It is not so easy. It is not like if you are willing to accept the truth now, then you will use it masterfully when the time comes. That is not necessarily so! You believe that you are currently very well equipped, and you would have no problem responding to those religious people and the greatest theorists, and even refuting them. Would you really be able to do so? What understanding can you speak of, with only that superficial experience of yours? Becoming equipped with the truth, fighting the battle of truth, and giving testimony to God’s name are not what you think—that as long as God is at work, all will be accomplished. By then, you might be stumped by some question, and then you will be dumbstruck. The key is whether or not you have a clear understanding of this stage of work, and how much about it you actually know. If you cannot overcome the enemy forces or defeat the forces of religion, will you not then be worthless? You have experienced the work of today, seen it with your own eyes, and heard it with your own ears, but, if in the end, you are unable to bear witness, then will you still have the gall to go on living? Whom would you be able to face? Do not imagine now that it will be that simple. The work of the future will not be as simple as you imagine it to be; fighting the war of truth is not that easy, not that straightforward. Right now, you need to be equipped; if you are not equipped with the truth, then when the time comes and the Holy Spirit does not work in a supernatural manner, you will be at a loss.