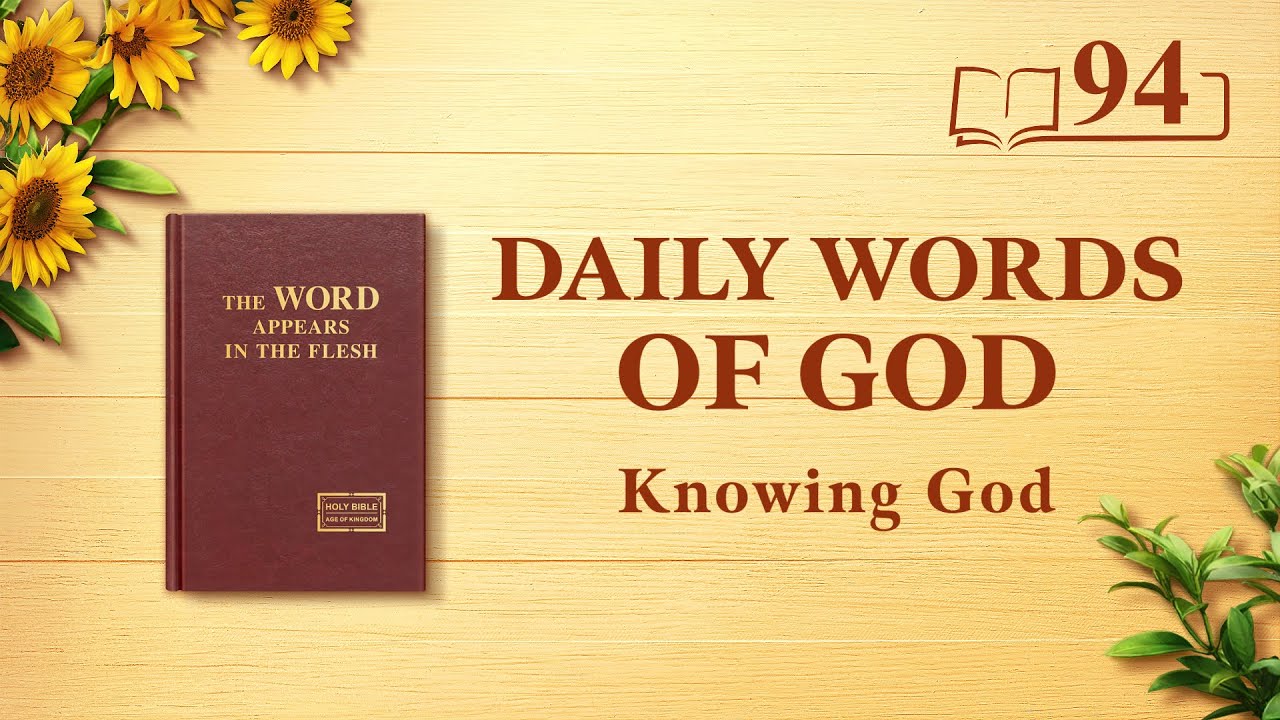 When God said “I will multiply your seed,” this was a covenant that God established with Abraham, and like the rainbow covenant, it would be accomplished for eternity, and was also a promise made by God to Abraham. Only God is qualified and capable to make this promise come true. Regardless of whether or not man believes it, regardless of whether or not man accepts it, and regardless of how man views it, and how he regards it, all of this shall be fulfilled, to the letter, according to the words spoken by God. The words of God will not be altered because of changes in the will or conceptions of man, and will not be altered by changes in any person, thing or object. All things may disappear, but the words of God will remain forever. On the contrary, the day that all things disappear is exactly the day upon which the words of God are completely fulfilled, for He is the Creator, and He possesses the authority of the Creator, and the power of the Creator, and He controls all things and all life force; He is able to cause something to come from nothing, or something to become nothing, and He controls the transformation of all things from living to dead, and so for God, nothing could be simpler than multiplying someone’s seed. This sounds fantastical to man, like a fairytale, but to God, that which He decides to do, and promises to do, is not fantastical, nor a fairytale. Instead it is a fact that God has already seen, and which shall surely be accomplished. Do you appreciate this? Do the facts prove that the descendants of Abraham were numerous? And just how numerous? As numerous as “the stars of the heaven, and as the sand which is on the sea shore” spoken of by God? Did they spread across all nations and regions, to every place in the world? And what accomplished this fact? Was it accomplished by the authority of God’s words? For several hundreds or thousands of years after the words of God were spoken, God’s words continued to be fulfilled, and were constantly becoming facts; this is the might of God’s words, and proof of the authority of God. When God created all things in the beginning, God said let there be light, and there was light. This happened very quickly, was fulfilled in a very short time, and there was no delay for its accomplishment and fulfillment; the effects of God’s words were immediate. Both were a display of God’s authority, but when God blessed Abraham, He allowed man to see another side of the substance of God’s authority, and allowed man to see the inestimability of the Creator’s authority, and moreover, allowed man to see a more real, more exquisite side of the Creator’s authority.

Once the words of God are uttered, the authority of God takes command of this work, and the fact promised by the mouth of God gradually begins to become a reality. Amongst all things, changes begin to occur in everything as a result, much like how, at the arrival of spring, the grass turns green, the flowers bloom, buds sprout from the trees, the birds begin to sing, the geese return, and the fields teem with people…. With the arrival of spring all things are rejuvenated, and this is the miraculous deed of the Creator. When God accomplishes His promises, all things in heaven and on earth renew and change in accordance with the thoughts of God—and none is exempt. When a commitment or promise is uttered from the mouth of God, all things serve its fulfillment, and are maneuvered for the sake of its fulfillment, and all creatures are orchestrated and arranged under the dominion of the Creator, and play their respective role, and serve their respective function. This is the manifestation of the Creator’s authority. What do you see in this? How do you know the authority of God? Is there a range to God’s authority? Is there a time limit? Can it be said to be a certain height, or a certain length? Can it be said to be a certain size or strength? Can it be measured by the dimensions of man? The authority of God does not flicker on and off, does not come and go, and there is no one who can measure just how great His authority is. Regardless of how much time passes, when God blesses a person, this blessing will continue forth, and its continuation will bear testament to the inestimable authority of God, and will allow mankind to behold the reappearance of the inextinguishable life force of the Creator, time and time again. Each display of His authority is the perfect demonstration of the words from His mouth, and it is demonstrated to all things, and to mankind. What’s more, everything accomplished by His authority is exquisite beyond compare, and utterly flawless. It can be said that His thoughts, His words, His authority, and all the work that He accomplishes are all an incomparably beautiful picture, and for the creatures, the language of mankind is incapable of articulating its significance and value. When God makes a promise to a person, whether it be where they live, or what they do, their background before or after they receive the promise, or how great have been the upheavals in their living environment—all this is as familiar to God as the back of His hand. No matter how much time elapses after God’s words have been spoken, for Him, it is as if they have just been uttered. Which is to say that God has the power, and has such authority, that He can keep track of, control, and realize every promise He makes to mankind, and regardless of what the promise is, regardless of how long it takes to be completely fulfilled, and, moreover, regardless of how broad the scope that its accomplishment touches upon—for example, time, geography, race, and so on—this promise will be accomplished, and realized, and, furthermore, its accomplishment and realization will not require Him the slightest effort. And what does this prove? That the breadth of God’s authority and power is enough to control the whole of the universe, and the whole of mankind. God made light, but that does not mean God only manages light, or that He only manages water because He created water, and that everything else is unrelated to God. Is this not a misunderstanding? Although God’s blessing of Abraham had gradually faded from the memory of man after several hundred years, for God, this promise still remained the same. It was still in the process of accomplishment, and had never stopped. Man never knew or heard how God exerted His authority, how all things were orchestrated and arranged, and how many wonderful stories occurred among all things of God’s creation during this time, but every wonderful piece of the display of God’s authority and the revelation of His deeds were passed on and exalted among all things, all things showed forth and spoke of the miraculous deeds of the Creator, and each much-told story of the Creator’s sovereignty over all things shall be proclaimed by all things forever more. The authority by which God rules all things, and the power of God, show all things that God is present everywhere and at all times. When you have witnessed the ubiquity of the authority and power of God, you will see that God is present everywhere and at all times. The authority and power of God are unconstrained by time, geography, space, or any person, matter or thing. The breadth of God’s authority and power surpasses the imagination of man; it is unfathomable to man, unimaginable to man, and shall never be completely known by man.