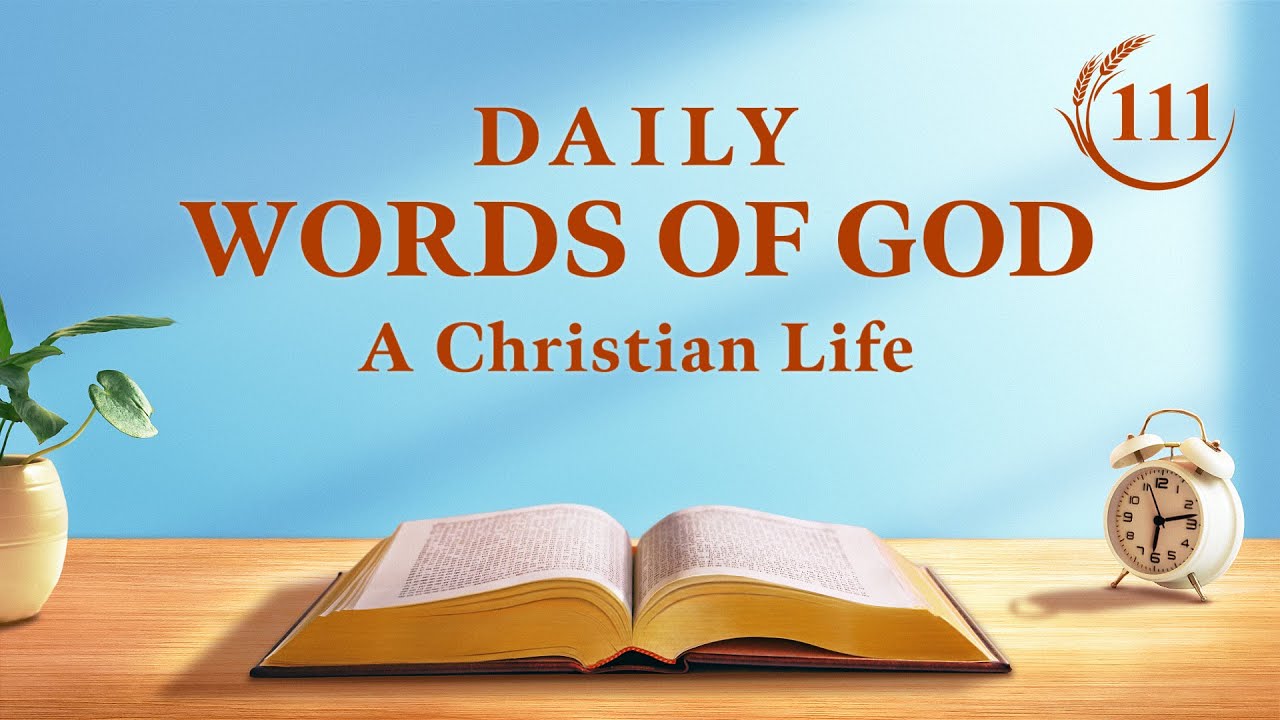 God become flesh only manifests Himself to a portion of the people who follow Him during this period when He personally carries out His work, and not to all creatures. He became flesh only to complete one stage of His work, and not for the sake of showing man His image. However, His work must be carried out by Himself, thus it is necessary for Him to do so in the flesh. When this work concludes, He will depart from the human world; He cannot remain for the long term among mankind for fear of standing in the way of the work to come. What He manifests to the multitude is only His righteous disposition and all His deeds, and not the image of when He twice became flesh, for the image of God can only be shown through His disposition, and cannot be replaced by the image of His incarnate flesh. The image of His flesh is shown only to a limited number of people, only to those who follow Him as He works in the flesh. This is why the work being carried out now is done so in secret. In the same way, Jesus only showed Himself to the Jews when He did His work, and never publicly showed Himself to any other nation. Thus, once He had completed His work, He promptly departed from the human world and did not stay; afterward, it was not He, this image of man, who showed Himself to man, but the Holy Spirit who carried out the work directly. Once the work of God become flesh is completely finished, He will depart from the mortal world, and never again will He do any work similar to what He did when He was in flesh. After this, the work is all done directly by the Holy Spirit. During this period, man is hardly able to see the image of His fleshly body; He does not show Himself to man at all, but remains forever hidden. The time for the work of God become flesh is limited. It is carried out in a specific age, period, nation, and among specific people. This work represents only the work during the period of God’s incarnation, and is particular to the age; it represents the work of the Spirit of God in one particular age, and not the entirety of His work. Therefore, the image of God become flesh will not be shown to all peoples. What is shown to the multitude is the righteousness of God and His disposition in its entirety, rather than His image when He twice became flesh. It is neither the one single image that is shown to man, nor the two images combined. Therefore, it is imperative that God’s incarnate flesh should depart the earth upon completion of the work that He needs to do, for He comes only to do the work He ought to do, and not to show people His image. Even though the significance of the incarnation has already been fulfilled by God twice becoming flesh, still He will not openly manifest Himself to any nation that has never before seen Him. Jesus will never again show Himself to the Jews as the Sun of righteousness, nor will He ascend the Mount of Olives and appear to all peoples; all the Jews have seen is the portrait of Jesus during His time in Judea. This is because the work of Jesus in His incarnation ended two thousand years ago; He will not return to Judea in the image of a Jew, much less show Himself in the image of a Jew to any of the Gentile nations, for the image of Jesus become flesh is merely the image of a Jew, and not the image of the Son of man that John saw. Even though Jesus promised His followers that He would come again, He will not simply show Himself in the image of a Jew to all those in Gentile nations. You ought to know that the work of God become flesh is to open up an age. This work is limited to a few years, and He cannot complete all the work of the Spirit of God. In the same way, the image of Jesus as a Jew can represent only the image of God as He worked in Judea, and He could only do the work of crucifixion. During the period when Jesus was in the flesh, He could not do the work of bringing the age to an end or destroying mankind. Therefore, after He had been crucified and had concluded His work, He ascended on high and forever concealed Himself from man. From then on, those faithful believers from the Gentile nations were unable to see the manifestation of the Lord Jesus, but only the portrait of Him that they had pasted on the wall. This portrait is but one drawn by man, and not the image that God Himself showed to man. God will not openly show Himself to the multitude in the image of when He twice became flesh. The work He does among mankind is to allow them to understand His disposition. All this is shown to man by means of the work of the different ages; it is accomplished through the disposition He has made known and the work that He has done, rather than through the manifestation of Jesus. That is to say, the image of God is made known to man not through the incarnate image, but rather through the work carried out by the incarnate God who has both image and form; and through His work, His image is shown and His disposition is made known. This is the significance of the work He wishes to do in the flesh.

Once the work of God’s two incarnations comes to an end, He will begin to show His righteous disposition throughout the Gentile nations, allowing the multitude to see His image. He will manifest His disposition and by this means make clear the ends of the different categories of man, thereby bringing the old age entirely to an end. The reason why His work in the flesh does not extend over a great expanse (just as Jesus worked only in Judea, and today I work only among you) is because His work in the flesh has boundaries and limits. He is merely carrying out a short period of work in the image of an ordinary and normal flesh; He is not using this incarnate flesh to do the work of eternity or the work of appearing to the peoples of the Gentile nations. The work in the flesh can only be limited in scope (such as working only in Judea or only among you), and then, by means of the work carried out within these boundaries, its scope can then be expanded. Of course, the work of expansion is to be carried out directly by His Spirit and will then no longer be the work of His incarnate flesh. For the work in the flesh has boundaries and does not extend to all corners of the universe—this it cannot accomplish. Through the work in the flesh, His Spirit carries out the work that is to follow. Therefore, the work done in the flesh is of an inaugural nature that is carried out within certain boundaries; after this, it is His Spirit that carries on with this work, and He does so moreover in an expanded scope.