A Small Blade of Grass That Grew Among the Brambles

In November 2016 I became acquainted, through Facebook, with Brother Lin and Sisters Zhang and Xiaoxiao of The Church of Almighty God. They integrated some of the prophecies from the Bible into the fellowships they gave me and bore testimony to God’s work of the last days. Their fellowshiping and testimonies made me understand that Almighty God is performing the work of judging and cleansing people through words upon the foundation of the work of redemption that was done by the Lord Jesus. Almighty God performs this work to thoroughly save mankind from Satan’s domain and rid us of our corrupt dispositions so that we will no longer rebel against and resist God, but instead will become people who truly obey and worship Him. From the words of Almighty God I came to understand that God’s work of judgment in the last days will reveal the wheat and the tares, the sheep and the goats, and the wise virgins and foolish virgins, ultimately separating each according to their own kind and rewarding the good and punishing the wicked. I realized that Almighty God was the return of the Lord Jesus I’d been longing for and I joyously accepted Almighty God’s work of the last days.

One day, Sister Zhu from my old church asked me out of the blue what I’d recently been busy with, and so I told her that I’d been investigating Almighty God’s work of the last days. Sister Zhu had a lot of bad things to say about The Church of Almighty God and also blasphemed Almighty God. She urged me not to have anything to do with them. I said, “I’ve been in touch with some brothers and sisters from The Church of Almighty God for some time now and it’s been great exchanging ideas with them. They have a fresh and clear way of fellowshiping truths, and I’ve understood a lot of truths from listening to them. It has helped me a lot, I’ve benefited a lot, and they certainly aren’t like you say. What’s more, Almighty God’s words are very practical and have resolved many issues I could never figure out before. His words can sustain our lives and they have shown us the path of practice.” Seeing my unyielding attitude, Sister Zhu changed tact and asked me if I’d tell Sister Yun—who preached the gospel of the Lord to us—about my investigation into Almighty God’s work of the last days. I told her, “No need to tell her yet. There are still many things that I don’t understand, but when I’ve finished looking into it and have become absolutely certain, then I’ll tell everybody what I’ve discovered.” She agreed that I should have a clear picture before I said anything to Sister Yun.

It therefore came as a surprise when, five days later, the boss of the salon I worked for came to me and said, “Yixin, Sister Yun has asked me to pray for you. In fact, I don’t know how to pray but I’ll do my best….” On hearing this I immediately realized that Sister Zhu had told Sister Yun about my investigation into Almighty God’s work of the last days. I felt that Sister Zhu hadn’t behaved very virtuously, and I was a bit annoyed with her. I felt that she’d deceived me and sold me out, and I started to feel that even my brothers and sisters in the Lord were untrustworthy. Just as I was thinking this, my boss, without consulting me about anything, got the attention of the dozen or so colleagues in the salon and told them that I wasn’t a good Christian and that I had gone astray. She went on to say many things which opposed and condemned The Church of Almighty God. This all happened so quickly that I didn’t know how to react, and I got very upset. I said a silent prayer: “Dear Lord, they’ve heard the news that You have returned, so why aren’t they at all interested in investigating Your return? Why are they only listening to online rumors and saying all that stuff that opposes and condemns You? Almighty God has expressed so many truths, so doesn’t that prove that Almighty God is Your return? Why do they have to oppose my belief in Almighty God? Could it be me who’s wrong? O Lord, I don’t know what to do. Please lead me and guide me….” 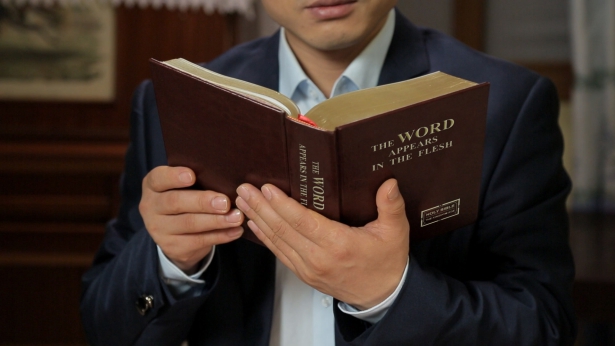 I later told Brother Lin what had happened that day, and he found a passage of Almighty God’s words for me: “Satan is constantly devouring the knowledge that men hold of Me in their hearts, and constantly, with teeth bared and claws unsheathed, engaged in the last throes of its death struggle. Do you wish to be captured by its deceitful stratagems at this moment? Do you wish, at the moment that the last phase of My work is completed, to cut off your own life? Surely you are not still waiting for Me to dispense My leniency one more time? Seeking to know Me is the key thing, but neither should you neglect to pay attention to actual practice. I am revealing insights to you directly in My words, in hopes that you will be able to submit to My guidance” (“Chapter 6” of God’s Words to the Entire Universe in The Word Appears in the Flesh). Brother Lin then gave fellowship. “We can see from God’s words that what happened to you was a battle in the spiritual world and you came up against Satan’s temptation. In the last days, God has incarnated in the flesh and is uttering His words in order to save mankind. By doing so, He enables us to understand the truth from His words, know God’s work, know God’s disposition, totally forsake Satan and turn back to God, and attain salvation and be gained by God. Satan is always on God’s heels, trying to disrupt and disturb God’s work, and using all kinds of people to create rumors to slander and condemn Almighty God—the Christ of the last days—and prevent us from coming before God. Religious leaders and atheists in positions of power are the embodiment of Satan, and every time God incarnates on earth to do His work they resist and condemn Him, and they try to disrupt and prevent people from following Him. When the Lord Jesus did His work, the chief priests, scribes, and Pharisees of that time acted as Satan’s lackeys and they did everything they could to condemn and oppose His work. They spread false rumors and bore false testimonies to slander and blaspheme the Lord Jesus. For example, they blasphemously claimed that the Lord Jesus was exorcising demons by the power of Beelzebub, they slanderously said that the Lord Jesus was inciting local citizens to not pay taxes to Caesar, and they bribed some soldiers to bear false testimonies stating that the Lord Jesus had not resurrected and that His body had been secretly taken by His disciples. When God incarnated to do His new work in the last days, the Chinese Communist government, who are attempting to turn China into a zone of atheism, along with many religious pastors and elders who want to protect their own livelihoods and status, began to spread countless lies and false testimonies about Almighty God and The Church of Almighty God in order to deceive and frighten people, and to prevent people from investigating and accepting God’s work of the last days. A lot of people who don’t understand the truth and who are without discernment blindly believe these rumors and do Satan’s bidding by spreading these fallacies, harassing people and preventing them from accepting the true way. Such people become the accomplices of Satan and they become the evil ones who oppose God. We must therefore see clearly that the atheist Chinese Communist government is the enemy of God, and see clearly that those pastors and elders who prevent others from investigating God’s work are the Pharisees of our time. We must see that all the rumors on the Internet are part of Satan’s scheme to prevent us from turning to God, and we must also be clear that if we want to investigate the true way, then we should only listen to God’s words and absolutely must not believe Satan’s rumors. This is how we will be able to stand on God’s side during spiritual battles and bear testimony for God, and not be taken by Satan.”

Brother Lin’s fellowship helped me to understand the origins of the rumors. I now understood that Satan’s aim in spreading rumors to disrupt and obstruct me was to prevent me from attaining God’s salvation of the last days. After thinking more about it, I realized that these people who were attacking me had never read Almighty God’s words, had never investigated Almighty God’s work of the last days, and were merely blindly believing in rumors and resisting and condemning Almighty God. Their minds had been completely addled by Satan and they were doing Satan’s bidding and resisting God without even knowing it. A wise person would first read Almighty God’s words in earnest and conduct a thorough investigation before reaching any conclusion. But faith in God is no small matter, and I was afraid of taking the wrong path, so I still had some worries in my heart. After getting home from work, I prayed to the Lord with tears in my eyes: “O Lord, I am very lost and confused, but I don’t want to just believe in what others say and parrot it word for word. I want to act according to Your will, so please lead me and guide me.” That night, I fell asleep, and some hours later I had a vague feeling that something was pressing down on me. I struggled to open my eyes but couldn’t. Realizing that struggling was pointless, I hurriedly shouted, “Save me Lord Jesus!” I shouted this twice, but nothing happened. I could still feel something pressing down on me. I was at a loss about what to do and got very scared. Suddenly, I thought about Almighty God, and so I called out, “Almighty God! Almighty God!” and then I woke up. After waking, I was still a bit shaken, and it took a while before I fully gathered my wits. I wondered why calling out the name of the Lord Jesus hadn’t worked while calling out “Almighty God!” had woken me up straight away. Then I remembered a fellowship that Brother Lin had given me: “God takes a different name in each age and, after God begins a new work, the Holy Spirit then upholds His name for the new age. So for believers to gain God’s commendation, care, and protection, they must pray using the name of God in the current age. In this age, the Lord Jesus has already returned and is using the name ‘Almighty God’ to end the Age of Grace and begin the Age of Kingdom. During the last days, God’s name is Almighty God, so we must use this name in our prayers, otherwise God won’t hear them.” It was then that I realized that my nightmare hadn’t been spontaneous, but that God had heard my prayer and had given me proof that Almighty God is the return of the Lord Jesus. Thanks be to God! After realizing this, my heart surged with strength and I now had the faith to face any assault from my boss and colleagues.

Next: Opening the Door to My Heart and Welcoming the Lord’s Return