Do You Know How Important the 10 Commandments of God and His Law Are to Mankind?

God’s words say: “When God began the official work of His management plan, He set down many regulations that were to be followed by man. These regulations were in order to allow man to lead the normal life of man on earth, a normal life of man that is inseparable from God and His guidance. God first told man how to make altars, how to set up the altars. After that, He told man how to make offerings, and established how man was to live—what he was to pay attention to in life, what he was to abide by, and what he should and should not do. What God set out for man was all-embracing, and with these customs, regulations, and principles He standardized people’s behavior, guided their lives, guided their initiation to the laws of God, guided them to come before the altar of God, guided them in having a life among all the things God had made for man that was possessed of order, regularity, and moderation. God first used these simple regulations and principles to set limits for man, so that on earth man would have a normal life of worshiping God, would have the normal life of man; such is the specific content of the beginning of His six-thousand-year management plan. The regulations and rules cover a very broad content, they are the specifics of God’s guidance of mankind during the Age of Law, they had to be accepted and obeyed by the people who came before the Age of Law, they are a record of the work done by God during the Age of Law, and they are real proof of God’s leadership and guidance of all mankind” (The Word, Vol. 2. On Knowing God. God’s Work, God’s Disposition, and God Himself II). 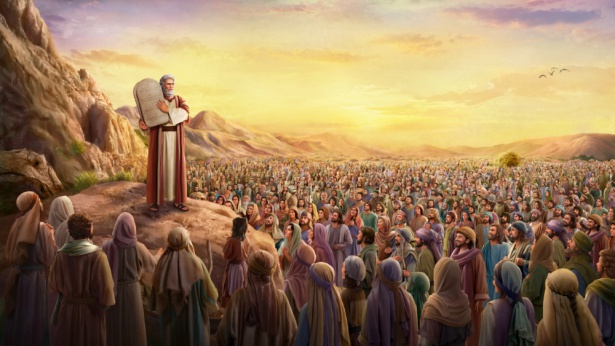 “God’s issuance of the commandments shows that, without the law that Jehovah God decreed to teach and instruct earliest mankind, there would not be the mankind of today, nor the so-called civilized society of present times. What does this ‘civilized society of present times’ refer to? People understand some norms of behavior, they know right from wrong, they abide by the law, and thus there is order throughout the whole of society, it is without chaos, and easy to govern, everyone is aware of the law, everyone knows to abide by public order and the law, and is held in check by the law. Was this done by God? The state of mankind today is inseparable from the laws that God decreed to the Israelites in earliest times. … Moreover, though these commandments were issued to the Israelites, only a handful of the Israelites heard them—yet these commandments continued to influence future generations. That the society of today’s mankind could be so orderly, that there could be such a complete legal system, which holds people in check in this way, and has had such positive effects on society, and has made the whole of society safe, harmonious, orderly—this is all inseparable from the commandments decreed at that time. What a great foundation they laid! If there had not been the earliest regulation of mankind’s behavior, the development of all mankind’s societies could not be as orderly and systematic as it is today. This is the embodiment of God’s deeds, and the result—the accomplishment, it can be said—of the work He did” (The Word, Vol. 3. The Discourses of Christ of the Last Days. The Attitude Man Should Have Toward God).

From God’s words, we can see that early mankind only knew how to enjoy everything that God provided, but what they didn’t know was that God had created heaven and earth and all things, and that He had created mankind. Nor did they know how to worship God, and they didn’t even have the most basic common knowledge about life. Just as a newborn baby has no awareness whatsoever of anything that goes on in the world around it, were it not for God’s work and guidance, mankind would simply have no idea how to live properly on earth. Against this sort of backdrop and in light of mankind’s needs, God used Moses to proclaim the Ten Commandments and the Law to the Israelites, and He taught mankind and gave them explicit instructions on all aspects of life. In doing so, the Israelites of those days finally came to have the common knowledge and rules by which they should live and conduct themselves, they came to know how to interact with one another and how to worship God in a way that accorded with His will, they came to understand what sin was, what goodness, wickedness, beauty and ugliness were, to know that such actions as burning, killing, robbing and plundering were sinful, and that they were negative things, and they came to know that such actions as observing the Law and commandments, keeping the Sabbath, making offerings to worship God, and so on, accorded with God’s will, and were positive things. Under the guidance of the Law and commandments issued by Jehovah, restrictions were placed on the behaviors of the Israelites, they came to have clear standards and norms, and they began to live their lives on earth in a proper, orderly manner. These were the results obtained with the Israelites by the commandments and the Law and, because they observed the commandments and the Law, the Israelites received God’s blessing.

Although the Ten Commandments and the Law were issued by God to the Israelites, they still have a profound impact on us, the later generations of mankind. The commandments and Law issued by God taught mankind how to survive and they regulated mankind’s actions; they became the foundation and the criteria by which mankind’s actions were measured to be sinful or sinless, and therefore the Ten Commandments and the Law provided the basis for the formulation of legal constitutions of later generations, and they lay the foundation for the betterment of legal systems for later generations. Many modern legal provisions and judicial concepts are formulated on the foundation of the Ten Commandments and God’s Law. For example, formulations such as intentional homicide, rape, theft, defamation and corruption all find their source in the Ten Commandments of “You shall not kill. You shall not commit adultery. You shall not steal. You shall not bear false witness against your neighbor. You shall not covet your neighbor’s house, you shall not covet your neighbor’s wife, nor his manservant, nor his maidservant, nor his ox, nor his ass, nor any thing that is your neighbor’s” (Exodus 20:13–17). Were it not for God issuing these commandments and His Law, then the whole of mankind would be just as the Israelites were back then, not knowing how to live, not knowing the difference between right and wrong and without any restrictions on our speech or actions. If that were so, then one can imagine that the whole world would have become so chaotic that mankind could not possibly have been able to develop until today, much less would today’s civilized society have been able to come into being. From this, we can see that the issuing of God’s Law and commandments not only had a profound impact on mankind’s legal systems, but they also played a key role in the establishment and formation of the moral civilization and the democratic system of human society. Nowadays, we have clear moral standards and we are able to keep public order, accept the restrictions placed on us by the law, and live stable, orderly lives on earth. These are all the results obtained by the commandments issued by God in the early days of the Age of Law, and even more so they are factual proof that God rules and guides all of mankind. This also allows us to see more that God has a perfect understanding of our needs, and that He is so responsible, so rigorous and so conscientious toward us! From the time God created mankind, God has always guided and led us, providing us with everything we need to survive, and issuing the Ten Commandments and the Law so that our actions may be regulated and so that we may live better lives. Only because of this have we humans been able to continue to live until this very day. The issuing of the Ten Commandments and the Law completely embodied God’s love and salvation for us, and we humans really cannot live without God’s guidance.

From the fellowship above, I trust that we now all have a clear understanding of the importance of God issuing the Ten Commandments and the Law, as well as the painstaking efforts God goes to to save us!

Thanks be to the enlightenment and guidance of God!

Previous: Reflection for Today: Does a Church Appearing Fervent Mean That It Has the Work of the Holy Spirit?
Next: The Interpretation of the Bible: Are All of God’s Words in the Bible?

Miracles of Jesus Christ: Understanding God’s Will Through the Resurrection of Lazarus

Through the miracle of raising Lazarus from the dead, the Lord Jesus enabled the people of that time to know that He was Christ and that He was the incarnate God Himself.

Christian Life: How Christians Can Get Along Well With Others

Gospel Message for 2020: The True Meaning of “No One Knows the Day or the Hour”

Disasters are now a frequent occurrence the world over. And some people testify that the Lord has returned. However, some people believe that if the Lord had returned, no one would know. Is that really the truth? Read on to learn the real meaning of “no one knows the day or the hour,” which will help you welcome the Lord’s return.