Today, January 31, 2020, The Church of Almighty God (CAG) released its 2019 Annual Report on the Chinese Communist Government’s Persecution of the CAG. In the past year, the CCP continued its brutal and inhumane persecution of the CAG, resulting in the arrest of at least 6,132 church members, the sentencing of 1355, and the death of at least 19. 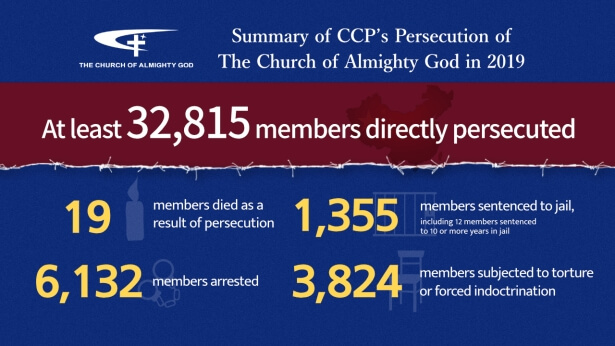 This report has been compiled based on over 30,000 cases of CCP persecution of CAG Christians that have been collected as well as official CCP documents regarding the persecution of religious beliefs. It provides a valuable resource made up of firm data and evidence for all individuals and organizations concerned with religious persecution and human rights in China.

The Church of Almighty God is a new Christian church in China. Since its establishment in 1991, it has suffered frantic suppression at the hands of the CCP. Throughout 2019, the CCP maintained its comprehensive ban on all religious beliefs, and its persecution of The Church of Almighty God continued to escalate. According to incomplete statistics, in 2019, at least 32,815 CAG Christians were directly persecuted by the authorities simply because of their belief in Almighty God and their engagement in such normal church activities as attending gatherings and preaching the gospel. Among them, 6,132 members were arrested; 3,824 members suffered various forms of torture and forced indoctrination; at least 19 members died as a result of persecution. Due to the fact that all of the CCP’s operations to arrest and persecute Christians were carried out in secret, coupled with its tight controls over information, these data represent merely a portion of the persecution that actually occurred.

Seven primary features of the CCP’s persecution of The Church of Almighty God are identified in the report, including the CCP’s extremely widespread utilization of cutting-edge surveillance tactics to capture Christians. Take Shandong, a Sharp Eyes Project model province, in 2019, after utilizing high-definition cameras to surveil, track, and home in on believers, authorities initiated nearly one hundred arrest operations across the entire province that resulted in the arrest of 924 believers, making up 64.3% of the (1,438) arrests of CAG Christians in the province.

In 2019 the CCP continued applying pressure on some democratic countries as well as utilizing Communist sympathizers and anti-religion individuals to stage fake demonstrations abroad in an attempt to have CAG Christians who had fled abroad extradited back to China.

The conditions under which the approximately four million CAG Christians in mainland China struggle to practice their faith and lead a normal existence have continued to worsen. Their situation is a great cause for concern and has attracted international attention.

CenSAMM Symposium The Millennium: A Mystery No More

Oniros Film Awards: To the Brink and Back Wins Best Documentary