October 24, 2018, The Church of Almighty God held its first photo exhibition in Seoul, South Korea with the theme of “The Origin and Development of The Church of Almighty God,” drawing eleven experts and scholars from seven countries including the USA, Canada, England, France, and Italy to attend and explore the exhibit. Massimo Introvigne, who is an Italian sociologist and the founder and managing director of the Center for Studies on New Religions (CESNUR), France’s Bernadette Rigal-Cellard, professor of North American Studies at the University of Bordeaux Montaigne, Canadian sociologist and author Susan Jean Palmer, and others raised questions on Almighty God’s work of the last days, and several Christians who accepted Almighty God’s work of the last days in its early period provided detailed answers to each one of them. They also shared their feelings and understandings from undergoing Almighty God’s work and words with the guests. 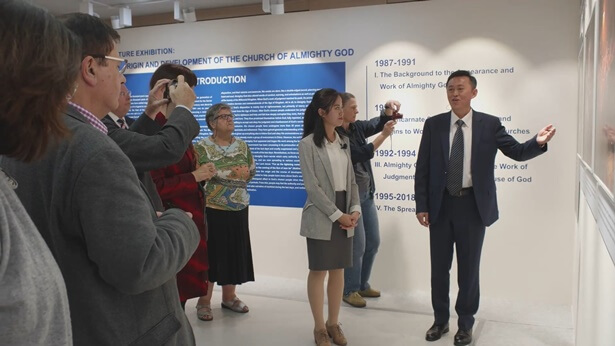 Experts and scholars from countries including the USA, Canada, England, France, and Italy listening to a Christian of The Church of Almighty God describing the history of the Church’s development

In the early 1980s, just as China’s reform and opening-up was beginning, there was a corresponding revival in religious beliefs. House churches, brutally persecuted by the Chinese Communist government, experienced rapid development and Christians sprung up all over China like wildflowers. When the development of house churches reached its peaks, just according to official figures, members of local churches (the Shouters denomination) had reached 200,000 by 1983, leading to great panic within the Chinese Communist Party (CCP). The government carried out multiple nationwide campaigns to suppress house churches in 1983 and 1987, but these Christians, true believers in the Lord, were not scared off by the CCP’s mad suppression and arrests. Some Christians in local churches (Shouters) continued to hold gatherings and read the Bible, weeping and praying to the Lord, imploring Him to return so they could be taken up to the kingdom of heaven. It was within these kinds of local churches that the Son of man incarnate began to utter words and work in secret.

On February 11, 1991, when the Son of man incarnate began uttering words, some saw that these words were really new and moving, and that they weren’t just average words, so they shared them with their upper-level leader. This leader saw that those words really were the voice of the Holy Spirit, and so rushed to get them printed and sent to all the churches so that God’s chosen people could read them and have fellowship. Almighty God later uttered more and more words, thus Christians of The Church of Almighty God began frequently reading His practical words.

In February 1992, there was a new starting point in Almighty God’s utterances. God began to speak to the whole universe using the identity and status of the Creator; this was God formally commencing the work of judgment beginning with the house of God in the Age of Kingdom. Then the Son of man incarnate, Almighty God, went from church to church, meeting and speaking with people, expressing truths to water and sustain people any place, any time in accordance with their states and deficiencies. He directed people toward the path of practice to enter into life, such as what perspectives people of faith should have, how to establish a proper relationship with God, how to experience and obey God’s work, how to serve in accordance with God’s will, and more. His words also revealed many truths and mysteries, such as the mysteries of God’s six-thousand-year management plan; the inside story and the aims of God’s three stages of work in the Age of Law, Age of Grace, and the Age of Kingdom; the mysteries of incarnation; the difference between being saved and attaining full salvation; the mysteries of the Age of Millennial Kingdom; the outcome and final destination of every type of person. He also revealed the true essence of mankind’s deep corruption by Satan and all sorts of satanic natures, the motivations and adulteration behind people’s faith in God and their absurd methods of practice. Almighty God has bestowed the corrupt mankind all the truth that they must understand in order to attain salvation and perfection, entirely fulfilling the prophecy in the Bible: “I have yet many things to say to you, but you cannot bear them now. However, when he, the Spirit of truth, is come, he will guide you into all truth” (John 16:12–13).

The Expansion of Almighty God’s Gospel of the Kingdom

In 1995, Almighty God’s gospel of the kingdom began to expand to various Christian denominations in mainland China. From 1997 to 1999, the gospel of the kingdom expanded rapidly throughout many provinces including Henan, Shandong, Anhui, and those in Northeastern China. Many believers within the Justification by Faith Church, Praise Church, Seventh-day Adventist Church and other Churches who longed for God’s appearance heard His voice in Almighty God’s words and turned toward Him, thus driving the expansion of the gospel to a peak. In 2002, the gospel of the kingdom officially spread to the south of China as well as its border and ethnic minority areas; by 2005 it had reached every corner of the Chinese mainland. By 2012 it had become a household name, known by everyone.

Since its establishment, The Church of Almighty God has been subjected to nonstop brutal suppression and persecution by the Chinese Communist Party, which has issued multiple confidential and top-secret documents to deploy armed police units, initiating round after round of special arrest operations targeting The Church of Almighty God. However, Almighty God’s words possess authority and power, and as soon as those who love the truth hear them, they recognize the voice of God and accept Almighty God’s work of the last days. Over just a little more than a dozen years, Almighty God’s words had conquered millions of people and they turned toward His throne, and the gospel of the kingdom had spread to every corner of mainland China. Today, it is spreading throughout the Western world, entirely fulfilling this prophecy in the Bible: “And it shall come to pass in the last days, that the mountain of Jehovah’s house shall be established in the top of the mountains, and shall be exalted above the hills; and all nations shall flow to it” (Isaiah 2:2).

Professor Bernadette Rigal-Cellard said with feeling: “I had not realized last year the link you [The Church of Almighty God] had with Watchman Nee and Witness Lee, so here it’s very clearly presented, so that I can see the origins of your Church. … Also it’s very important for us to see the people how they worshiped in the beginning, how they met, but also afterward the persecution started. … But at the same time it shows you have the truth.”

Professor Massimo Introvigne also said: “I believe the exhibition is very useful particularly because scholars were allowed to visit the exhibition with brothers and sisters who were there since 1991, because some details were already known, but some other details are new. So the exhibition is very useful to gain a better knowledge of the origins of The Church of Almighty God, particularly of the crucial years, 1991 and 1992, which are extremely important for understanding how The Church of Almighty God came into being. … The rest of the exhibition, what happens particularly after 1995, is largely the history of phenomenal growth and persecution. … I believe that’s a very worthy work.” 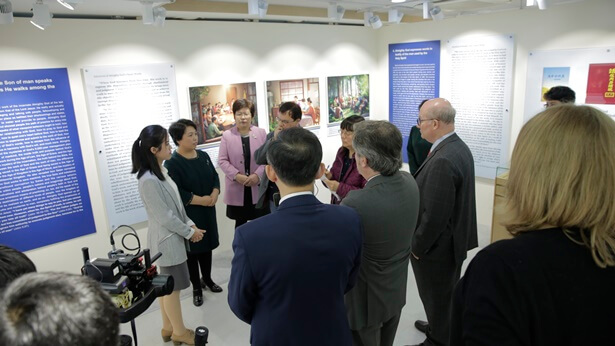 The photo exhibition covered a number of topics, but it was far from being able to display the entire progression of The Church of Almighty God’s birth and development. It is necessary to carefully read the words expressed by Almighty God, Christ of the last days, in order to truly understand the Church. Almighty God has now uttered millions of words, most of which are included in the book The Word Appears in the Flesh, which has been translated into more than 20 languages and published online so that people all over the world may seek and look into them. Almighty God has now made a group of overcomers in mainland China and His work in the last days of secretly coming to the earth and working is on the verge of concluding. God is going to return to Zion. After the disaster prophesied in the Book of Revelation befalls, God will appear to all peoples with ten thousand of saints, which will fulfill the prophecy of the Lord Jesus coming on a cloud: “Behold, the Lord comes with ten thousands of his saints” (Jude 1:14). “And then shall they see the Son of man coming in a cloud with power and great glory” (Luke 21:27). “Behold, he comes with clouds; and every eye shall see him, and they also which pierced him: and all kindreds of the earth shall wail because of him” (Revelation 1:7). At that time, all who have refused to accept God’s hidden work, who still resist and oppose Almighty God, Christ of the last days, will only be able to weep and gnash their teeth amidst disasters. They will lose their chance at God’s salvation for eternity. But those who hear God’s voice, accept Almighty God’s work of judgment in the last days, and gain purification will be led into God’s kingdom, receiving God’s promise and blessings.

Previous: Canadian Human Rights Organization Holds Press Conference: Calling Attention to Human Rights in China
Next: US Congressional Briefing: A Call for Sanctions Against the CCP for Human Rights Violations

The afternoon of January 25, 2020, over a hundred people gathered in Piazza Visconti in Rho, Milan, Italy for a torch march for peace in...

On September 14, 2018, Toronto, located on the shores of Lake Ontario in North America, welcomed the 2nd Canadian International Faith &...

“Peace, Not Persecution”— A Torchlight Procession for Peace in Italy

In recent years, the number of refugees displaced by war and religious persecution has reached its highest level since World War II,...

112 Rally in Seoul: Christians Expose the CCP’s Lies and Tyranny in Support of Hong Kong People

To express support for the Emergency Call for Aid and Autonomy Rally in Hong Kong, several local organizations came together to hold a...

Interview with a Christian Persecuted by the CCP: Meeting, but Not Recognizing

HRWF: EU Should Not Repatriate Those Under CCP’s Unprecedented Religious Persecution

Fourteen Years on the Run

Interview with a Christian Persecuted by the CCP: Meeting, but Not Recognizing